When The World Turned Upside Down

When The World Turned Upside Down

Some events in history define the direction of the future…….such as the day……..

Title  :  When The World Turned Upside Down

Nothing has been the same ever since…………even….

A Rare and Ancient Artifact?

A Rare and Ancient Artifact?

Sometimes we come across something that is so beautiful and rare it nearly blows your mind.

Recently I discovered such a gem and want to share it with you here.

It is so rare and so valuable I might have to put it to auction to see what its real value is.

You can see the delicate and intricate markings all over the surface. For some reason I am drawn to the Ming Dynasty which was also called Empire of the Great Ming, the ruling dynasty of China for 276 years (1368–1644) following the collapse of the Mongul-led Yuan Dynasty. They could have had such items. If so it must be worth a fortune.

Below is a little bit to show how Christie’s Auction House sell items of such rarity for very large sums of money.

Christie’s offers ancient art from the dawn of civilization to the Dark Ages, ranging from Western Europe to the Caspian Sea, embracing the cultures of Egypt, Greece, Rome and the Near East.

Christie’s London holds the world auction record of £7,926,650 for the Jenkins Venus from Newby Hall, England. This Roman marble statue was sold in 2002 for the highest price ever achieved for an ancient classical marble sculpture at auction.

So by now are you ready to pay almost anything for the above item?

First offer over $1 Million can have it ………… No, sorry it is priceless and not for sale.

Could this below be the answer? 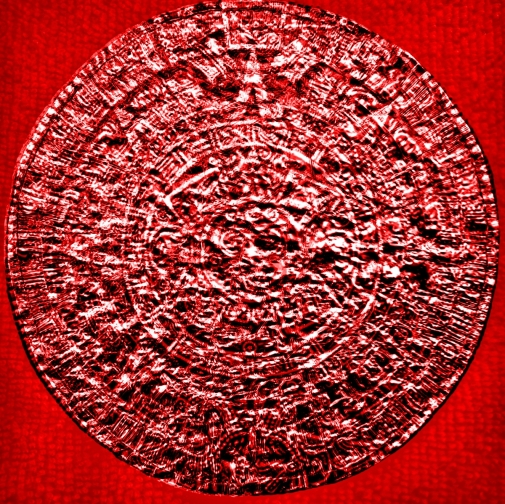 Overlay of a Mayan Calender

ALWAYS KEEP YOUR EYES OPEN ….YOU NEVER KNOW WHAT YOU MIGHT FIND!

Now.. you are welcome to try to identify it for yourself…….. if you can.